I invented the highlighted sponsored keyword in 1998. You’ve seen them all over, in news articles and blogs—the keywords in an article that have the double underlining that leads you to more information or pops up an ad. In the picture below, you can see that HP has bought the keyword “led.” Whenever the word is used on the Website, a user can mouseover the double-underlined word and see an ad.

First I tried to get the Nielsen Company and later, a startup I was in, to understand the value of the concept. Of course, this was way before there was the TextEnhance code, AJAX and the javascript support that would make the mouseover feature work.

My concept for Nielsen, who sells marketing information derived from point of sale devices to consumer packaged goods companies, was to rewrite cooperating news pages to feature links to Nielsen tables, graphs, and reports on the company. Kind of like what you see now, with ticker links on Yahoo, the Wall Street Journal or others. 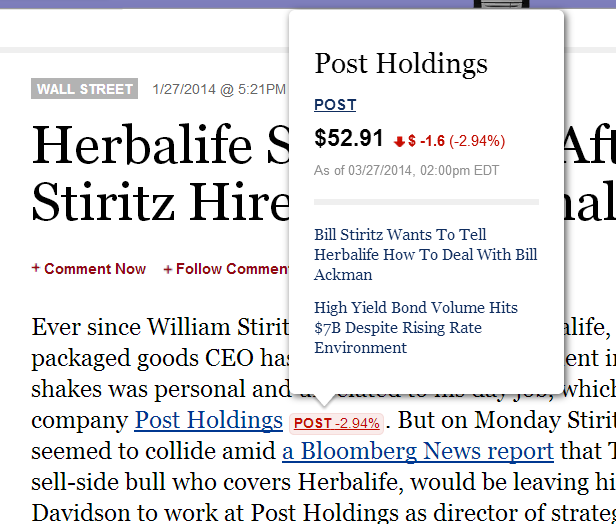 Nielsen did not get the concept and could not even consider changing their business model—charging big brands millions for access to their databases—to a model involving retailing their information.

My concept was the hyperlink would go to some basic information about the performance of the brand, and on that page, there would be a link to purchase a report, either on the company or on one of its brands.

Now as I say in another blog, having a great idea is not enough. This sure proves that point. For a variety of reasons, I abandoned my quest to monetize this invention. Instead, marketers with more stick-to-itiveness than I, such as IntelliTXT, an “in-text” advertisement platform developed by Vibrant Media, or AdChoices, went ahead and made businesses out of this idea.